skip to main | skip to sidebar

Finally I'm pleased to share the publication of this work!
Here is the full reference:
Girón, J. C. & N. M. Franz. 2010. Revision, phylogeny, and historical biogeography of the genus Apodrosus Marshall, 1922 (Coleoptera: Curculionidae: Entiminae). Insect Systematics & Evolution 41: 339-414.
We are the front cover of this issue! 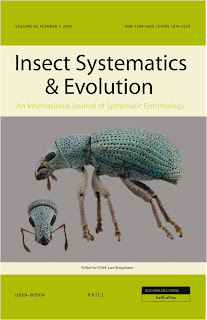 Posted by Jennifer C. Girón at 9:35 AM No comments:

And again, it has been a while since my last post... sorry I'm an abandoner!
Well, this history has finished by now... the article has been submitted for revision inthe journal "Insect Systematics and Evolution", it includes the descriptions, photographs, drawings, maps, phylogeny and historical biogeography of the genus.
I'll let you know if and when it is published.
Posted by Jennifer C. Girón at 2:26 PM 22 comments:

Preparing the presentation: Does it worth it?

I'm not sure if it's just me but when I was preparing my presentation for the ESA Annual Meeting, my characters resulted to me so insignificant... it was like all the time I've spent looking at the weevils trying to find characters, recognizing character states, coding, analyzing, thinking about groupings, distributions... in some point all turns so light... as if all the work was not really saying anything...
But you need to stop... if the characters are not which/what you expected, there are several factors influencing your results, but most of all, THOSE ARE YOUR RESULTS and there is nothing you can do about it, just to try to present it as down-to-earth as you can, and in such a way that you feel comfortable with what you are saying and how you are saying it.

This is a link to the presentation:
http://academic.uprm.edu/~franz/publications/Giron-ESA2009-Presentation.pdf

And this is me giving the presentation: 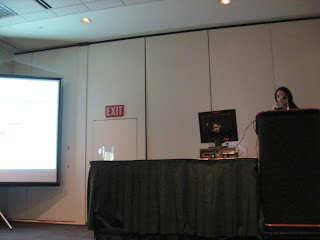 And this is a photo of the "weevil persons" in 2009 meeting: 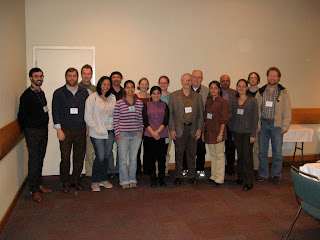 And the moment to say something about biogeography came!
What could I say??? I think it is because of the school that I had as undergraduate, I cannot say things from which I'm not completely certain/convinced and I need to have arguments to defend what I'm saying.
Biogeographic History of Apodrosus looks to me as too pretentious:
- I'm not sure if we (I?) now know ALL Apodrosus species and how extensive the distributions are. Several species are represented by individuals collected at the same and unique event.
- I was impeded to talk about Bio-geography also because I don't really know about the ecological requirements and limitations for each species; I only know about Puerto Rican species because I've been here collecting them and I now know where I can found which one (there are only 3).
- Now History? please! I don't have (yet) the Caribbean geologic history in my head to try to explain diversification patterns within and among islands... At last, i was in psychological negation to use such a sumptuous title.
Well, what I do know and what I can handle without feel I'm promising too much?
- I have 13 recognizable (and named jejeje) species.
- I have distribution data for all the specimens, that can be traced on a map.
My advisor (Dr. Nico Franz - UPRM) gave me a useful and simple guide of how to do a Divergence-Vicariance analysis without too much to think. At first I just thought "ok, let's do what he said", but the more I advanced in the exercise, the more sense it acquired.
First, for the 20 species I had 17 areas of distribution: the analyses didn't run!
The next logical (?) step was to reduce the number of areas by fusing sectors: I had then 8 areas of distribution that results in 9 dispersion events BUT, not always the sequence of the "dispersion" had a "simple" explanation (which I could handle without thinking in vicariance and extinction). So, fuse areas again!
At the third attempt I had 5 areas (which couldn't be amalgamated in a merely geographic sense without appear arbitrary). The analysis resulted in 5 dispersion events, that are understandable without too much history involved (overall taking into account I had no time to learn about Caribbean geological history at that moment).
This is an image of the results:
- A map (courtesy of Google maps) with the five defined areas :
- Central America - Hispaniola - Puerto Rico
- The Turks and Caicos Islands - The Bahamas
- A taxon/area cladogram in which the branches correspond to species and colors to areas.
- An area cladogram without geological time incorporated, just to show the dispersions. 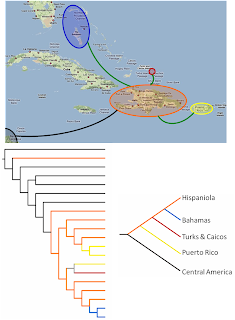 If we incorporate geological history, the cladogram will tell if the current distribution is explained for vicariance, dispersals, extinctions... that would be really informative!
Posted by Jennifer C. Girón at 4:54 PM 1 comment:

And then, it turns out that I had to baptize my species before the presentation instead of leave them as sp. 1 JCG, sp. 2 JCG, etc (the code adopted in the beginning of this history)... nobody knows how much I broke my head thinking in appropriate names... because they will last more than I in this planet/history-sequence, and because MY weevils as beautiful as they are, deserve at least pretty names I think...
Anyway, I have to recognize that I have the trend to delay things... maybe is just a matter of custom... so, it was the last week before the meeting in which a kind of inspiration invades me and I decided to name the species according to their coloration pattern (in most of the cases) because it is quite distinct but is not easy to code as a character... also because as a good Colombian, I work better under pressure...
The names are:
Apodrosus eximius (meaning uncommon) because it was the species with the lowest number of specimens in our field trip across the Dominican Republic.
Apodrosus artus (meaning narrow) in reference to its narrow body shape compared to the other species.
Apodrosus andersoni, named after the weevil specialist Robert Anderson (Canadian Museum of Nature) who has helped me a lot from my beginning as a "weevil person"
Apodrosus earinusparsus (earinus - green; sparsus - sprinkled) because of the coloration of the scale coverage.
Apodrosus epipolevatus (epipole - surface; levatus - raise) because of the elevations of the elytral surface.
Apodrosus mammuthus from mammuth (large), its the largest species.
Apodrosus viridium (viridis - green; ium - diminutive suffix) a small and green species.
Apodrosus stenoculus (steno - narrow; oculus - eye) with narrow eyes in lateral view, compared to all other species.
Apodrosus quisqueyanus for Quisqueya, the name for the Hispaniola island in Taíno language.
Apodrosus empherefasciatus (emphere - apparent; fasciatus - striped) because the elytral scales are slightly darker in interspersed intervals, appearing lightly striped.
Apodrosus adustus (meaning brown, tanned) because of the predominant dorsal brown coloration.
Well, it wasn't easy to choose, but a kind of interesting and funny, and I'm happy with the names now jejeje!
Posted by Jennifer C. Girón at 3:15 PM No comments:

So, the first attempt could have been worst but still was not good, then the game of get things (taxa/characters) in and out began!
The matrix had 41 characters for 22 taxa:
Experiment 1. Without Anypotactus: Take all Anypotactus out would obligate me to found more characters... Not fun... so, I took the one with lowest level of noise (inapplicables) and also would allow to polarize some characters: 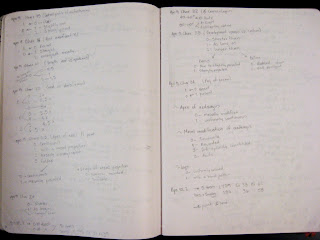 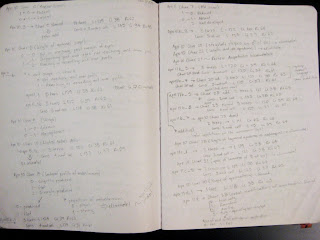 The game continued until the final matrix was ready -I must confess that it was in part because of the low rate of will reached at that point and because there were discussions, analyses and a presentation remaining to be done before the ESA annual meeting-
This is the last version of the matrix and the single MPT that it produced (L=76; CI=42; RI=69): 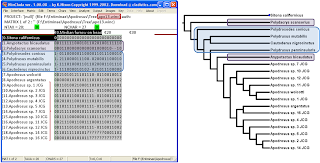 The Outgroup has a "rare" distribution (it doesn't matter now)
Anypotactus bicaudatus is the sister taxon for Apodrosus clade... jum... interesting!
sp. 6 JCG and sp. 13 JCG were excluded because there are several characters that group them and I still don't know how to decide if they belong to another different and surely new genus.
Now I'm comfortable with the groupings within Apodrosus!
The names?? uh... let's decide after...
Posted by Jennifer C. Girón at 11:09 AM No comments:

Then, there I was, wondering about differences, how to call those differences, how many and which states to code...
This was the initial matrix... Notice the name of the file (Apodrosus.winc) and the names of the species: they are going to change briefly. The Anypotactini are shaded in purple, the Polydrusini in blue and in green, two "Apodrosus" that are very different from the rest, and similar between them: still not sure about who they are.
9 outgroup taxa, 2+9+2 ingroup taxa, 29 characters: 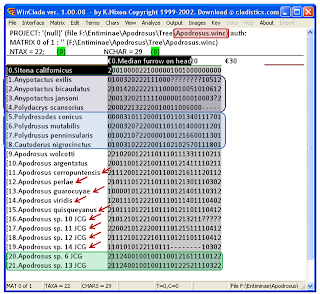 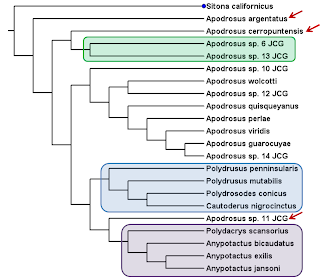 A rare result, with really bad statistics:
Anypotactini grouped: Good
Polydrusini -Outgroup- grouped: Good
sp. 6 JCG and sp. 13 JCG grouped: Good
Why argentatus is the sister group for all???
What is sp. 11 JCG doing being grouped with the Anypotactini???
There's no coherence between this tree and what was supposed to happen... there is something wrong, this is not what I expected...
As with most things in life, it couldn't be perfect the first time.
Posted by Jennifer C. Girón at 8:31 PM No comments: